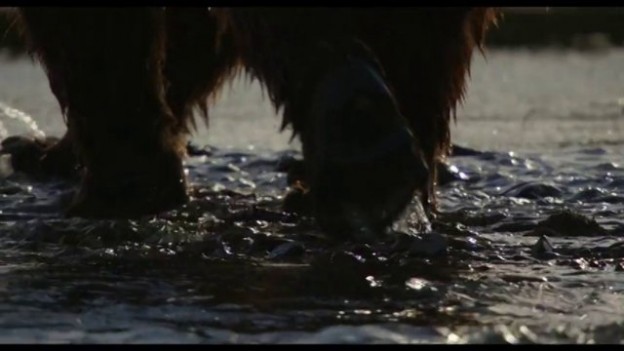 Disneynature has come a long way since it was first launched as a division of Walt Disney Studios back in 2007. The first documentary released under the emblem–aptly titled Earth–rehashed old footage taken from the BBC series Planet Earth and overlaid new narration by James Earl Jones. Every year or two since 2008, the studio has released a new original feature-length nature documentary in theaters to coincide with Earth Day. This year’s movie, titled Bears, opened around the country on April 18th and was almost universally lauded as the best Disneynature film to date.

Bears follows a year in the life of a mother grizzly bear named Skye as she tries to protect her two newborn cubs (Scout and Amber) in the wilds of Alaska. Beginning at the end of winter as the snow begins to melt and the bears emerge from hibernation, the film traces the family’s journey down from the mountains to the coast–where Skye needs to be able to eat hundreds of pounds of salmon throughout the summer if she wants her babies to survive the next winter. It quickly becomes clear, however, that life isn’t easy for a bear with cubs, and Skye has to defend her babies from threats that include an avalanche, two imposing male bears, and a hungry wolf.

A family film at heart, this documentary never ventures into territory that is too scary for kids. Even though it’s pointed out early on in the movie that only about 50 percent of bear cubs survive their first year, you can be pretty confident that the odds will be a little better for Scout and Amber. Still, in spite of being a little formulaic, the movie never becomes saccharine, and it relies on the beauty of its nature photography to carry the story.

As in most nature documentaries, the direction, editing, and narration truly have the ability to make or break the film, and Bears profits from the talents of directors Alastair Fothergill and Keith Scholey (who previously teamed up on the Disneynature feature African Cats). The narration provided by actor John C. Reilly is excellent and provides the perfect mixture of playful one-liners and educational information. The movie never talks down to its audience, but kids and adults alike will enjoy Reilly’s charm.

It becomes easy to take for granted just how difficult it is to film a nature documentary in a wild environment like Alaska–especially because all the shots in this film are so seamless and make viewers feel like we are truly along for the journey. The end credits, however, break the fourth wall via a “making of” featurette that shows the lengths filmmakers went to while filming Bears. From sweeping helicopters trolling overhead to cameramen draped in camouflage and standing mere feet from these massive creatures, this set of clips allows audiences to truly appreciate how difficult this movie was to make.

On the whole, Bears is a sweet movie that is fun for the whole family to watch. It’s admirable both because of its filmmaking achievements and because of the story it tells–that of a mother bear who will do anything to protect her cubs. Animal-lovers of all ages will be entranced.