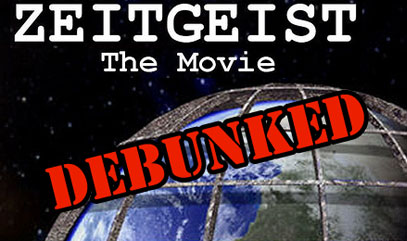 Zeitgeist is a film that created something of a stir across the internet in the same vein as Loose Change, a documentary that appears to be loosely thrown together with the stated intent of shaking up “the institution”. Boasting that it has been viewed by over 70,000 people in live, theatrical settings, the maker of the film also ardently defends every point he’s made in his website’s Q&A section, arguing that none of his points can be debunked, and almost goes so far as to discourage attempts at debunking the film, even though the movie’s goal has been to encourage people to go “find out for themselves”.

Unfortunately in the case of Zeitgeist, you have to, because the information in the film is so badly in err and so consistently simply contradictory to fact that the only way to get an accurate portrayal of human history is to ignore it completely. In many ways, Zeitgeist can be an educational tool because it points out potentially subtle points in history, while in turn getting them tragically wrong, therefore pointing a would-be student or scholar in the right direction.

It is no understatement to say that the entire first portion of the film – an attempt to thoroughly debunk Christianity – is simply wrong. There is no simpler, or even more complex, way to state this than the documentary’s entire first portion is a simple fabrication. Even the most ardent anti-Christian should do their best to distance themselves from the film, as what it teaches will only discredit that side’s arguments – and should it go mainstream as an “atheist” thought, then Douglas Adams would be rolling in his grave.

The basic premise of Part I, called sardonically “The Greatest Story Ever Told”, is that Christianity is in fact an astrological allegory that has been misinterpreted by Christians, and that the entire story is a rewrite of common solar mythologies. If this documentary is to be believed, the entire Nativity story is one big misunderstanding, because we mixed up the word “son” with the word “sun”, and that’s who is really being referenced.

Before leaping into what the film maker calls astrological “coincidences”, he begins by trying to draw correlations between the Jesus story and previous religious icons. His first choice, which is later revealed to be part of an overarching belief that all of Christian beliefs are lifted from ancient Egyptian mythology, is that of Horus. According to him, the two are almost identical: Horus was born on December 25th, he was born of a virgin, a star in the East told of his birth, he was adored by three kings, at 12 he became a prodigal teacher, he was baptized at 30, he had 12 disciples, he performed miracles such as walking on water, he was called titles such as “the way, the truth, and the light”, “the lamb of God”, he was betrayed by one of his disciples and was resurrected three days later.

This does sound frighteningly like Christ – the only problem of course, is that none of these things are said to have happened to Horus. In an amusing turn of events, the similarities are simply made up to suit the film maker: Horus wasn’t born of a virgin mother, his mother was a goddess that impregnated herself with Osiris’s castrated penis. He wasn’t born on December 25th (but then, neither was Jesus), due in no small part to the fact that December wouldn’t exist for at least 2500 or so more years.

The ancient Egyptian calendar was a little different and a little more complex – and in truth, December 25th would’ve really been in a month, depending on which kingdom you were in, called Fourth of Shemu, Wep-renpet, Msw-r, Mesore, Mesori, or Mesra.

There are other problems with this Horus story of course, such as the fact that crucifixion wasn’t practiced in ancient Egypt circa 3000 B.C. as the film maker claims: the closest thing archaeologists can find are hangings, which, for anyone with the slightest modicum of understanding ancient forms of execution knows is certainly not the same thing as crucifixion. Crucifixion’s earliest known occurrences were in Sumeria, Babylon, and Persia of 7th century B.C. While this was certainly very far back in time, it falls far short of the 3,000 B.C. claim.

Many who stand by Zeitgeist argue that the Old Testament actually refers to the Egyptians crucifying someone in the story of Joseph, when the Pharaoh’s baker is convicted of theft and hanged, his body then left on display. Unfortunately, hanging and putting a body on display is not exactly hard boiled evidence of a crucifixion – as always, it was more than likely a simple hanging.

The complexity and high detail of Egyptian mythology makes it virtually impossible to make a correlation between Jesus and Horus in any more than a passing glance. When you attempt to make comparisons between two religions, you fundamentally have to look at the entirety of belief for both sides – and unfortunately in this case, even if you completely omit the simple fabrications made up by the film maker, you are left with two lives that are in no way similar.

For example, Jesus was supposed to be the son of a very human woman, Horus was said to be the son of a goddess and her lover’s severed phallus. Jesus was considered to be the living embodiment of a monotheistic God, whereas Horus is not only marred in ambiguity about just what god in a pantheon he represents, he even separates himself into two different Horuses (the Greater and the Lesser).

To further justify the Horus-Jesus connection, the film maker turns to a story told entirely in hieroglyphs on the wall of the Temple of Luxor. According to this story, Horus is foretold by a priest, is born a virgin, baptized, and fundamentally lives like Jesus. This again runs into issues when you account for the fact that whether willfully ignorant of the facts, or simply lying, the wall on the Temple of Luxor isn’t talking about Horus, it is talking about Ra, who later merges with Horus to make a whole new super deity.

The “disciple” connection he attempts to make in the Temple of Luxor has actually been interpreted as meaning the other deities worshiping Ra – and in essence, once more, the film maker is simply wrong about the conclusions he draws.

As if the Horus debacles weren’t enough, the film tries to show that Moses was not a historical figure either, and was in fact stolen from the legendary Akkadian king Sargon. According to Zeitgeist, Sargon was born in secret, hidden in a basket to avoid mass infanticide, pushed down a river, found by a midwife, and raised into royalty. Sound like Moses? Of course – because once more the film is changing details.

Sargon of Akkad’s mother wasn’t a low-born slave like Mose’s mother was, she was a high priestess, and Sargon himself was a bastard – presumably this is why she was hiding him. He was not found by a midwife, he was found by a water drawer that the film correctly identifies as Akki. However Akki was not a midwife, he was a man, and he raised Sargon as a gardener. Only later as a servant to the king did Sargon come into his own royalty.

The facts get further jumbled when he tries to argue that all of Christianity is largely a solar worship – to the point that he calls Jesus “the newest Solar Messiah”. To justify this, he argues that on Jesus’s declared birth date, December 24th, the “star in the East” is Sirius, which lies beneath Orion’s belt, which at the time was called the Three Kings. If you follow the Three Kings down Sirius, it points to the sunrise on December 25th. He also argues that the virgin Mary is actually the constellation Virgo – there was no town of Bethlehem, that was a misinterpretation of the word “bread basket”, which is a reference likewise to Virgo.

Therefore, it is argued, Jesus was a solar phenomenon, not a physical one. To believe this, we only need to overlook the rest of the New Testament, the Roman census, and the family tree constructed by Matthew and Luke.

The film continues to rail that the disciples represent the twelve zodiacs, and Jesus represents the “age of Pisces”, while Moses represented the coming of this age, the Ten Commandment story whereby he destroyed them in a fit of rage over the gold bull worship was actually an allegory for the changing of the ages from Taurus to Pisces. Confusing and disjointed so far? I wouldn’t really be surprised if this was the film maker’s actual aim.

Are we seeing a common, almost Jim Careyish “23” style theme? That’s what you’re meant to see – unfortunately, once more, the facts are simply made up.

Firstly, the attempt to rail on the bizarre coincidence between “twelve tribes, twelve sons, and twelve patriarchs” is intellectually dishonest, because they’re derived from the same base number, which is the twelve sons of Jacob. The twelve sons became the twelve patriarchs of twelve tribes (with a few change ups such as Reuben losing his claim to land, and Joseph aiding in the rule of Egypt) of twelve tribes, therefore the “multiple coincidences” are really resigned to one, if it can be called that. As for everything else?

Simple mistruths at their finest:

There were not twelve kings of Israel. Saul, David, and Solomon were the three kings of a united Israel. Following Solomon’s death, many tribes revolted, and the kingdom was split. Maybe they were talking about a subsequent twelve kings? No that can’t be, because there were 19 kings of Israel, and 20 kings of Judah for a total of 39 total kings.

There were not twelve Old Testament Prophets – there were 48 male, and 7 female. Perhaps he was talking about the books in reference to prophets? N, there were 14 of those.

Unfortunately, for a film titled as a documentary, these simple kinds of falsities or possibly downright lies are consistent throughout Zeitgeist – making it possibly the internet’s least factual video, as for the nearly hour long duration of the anti-Christian section, nearly every claim is either misplaced, or simply wrong. When Zeitgeist is not making erroneous claims, it is using “John F. Kennedy – Abraham Lincoln coincidence” style sheets to demonstrate how Joseph was actually the Old Testament “prototype” for the Jesus story.

Ultimately, if terrible research and flawed logic based on a single piece of work by Thomas Paine interests you, then by all means this is a film worth watching, if only to figure out what all the excitement is about. However, not from minute one to minute end can essentially any word of the film maker be trusted – as proven above.