Home » Bethlehem’s Church of the Nativity 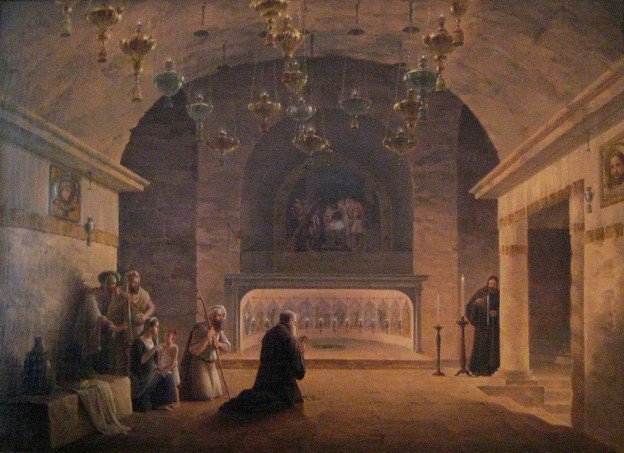 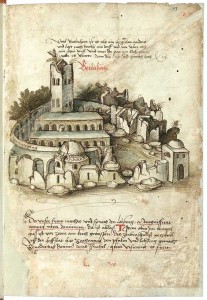 The basilica and grounds as depicted in 1487 AD (image courtesy of Wikipedia).

With the dedication of the Church of the Nativity in Bethlehem in the 330s by a church council, Constantine I ended years of building over the site where many Christians believe Christ was born to the Virgin Mary. A convert to Christianity from Mithraism around 312, Constantine was the first Christian to rule the Roman Empire. Ruling for more than 30 years until his death in 337, he built more churches than any other Roman emperor.

His mother Helena was as ardent about Christianity as he was. An energetic and pious woman who lived until 328 when she was 79 years old, according to Eusebius, bishop of Caesarea and author of a multi-volume history of the early church, Helena traveled (perhaps, from Rome) to some places where Jesus had lived and died. Her trip began possibly in late summer 326 and extended well into 327. She visited Nazareth, Capernaum and Caesarea. She stopped in Jerusalem too and in Bethlehem five miles to the south.

By the time of her trip, many Christians believed that a particular Bethlehem cave was the site of the virgin birth. However, some scholars now believe that Christ was born elsewhere on the site of the church since the cave was most likely used as a stable. Helena decided that a church must be built on this site. Constantine, who was very close to his mother, agreed. According to the 2012 article the “Historical and Archeological Analysis of the Church of the Nativity” by Michele Bacci, Stefano Campana and others, the construction of the church was probably complete by 333.

Even though a number of scholars now say that Christ was born in Nazareth and not in Bethlehem, the building of this church centuries ago solidified the belief that Christ had been born in Bethlehem and, of course, made it a site for Christian pilgrims to this day. Constantine gave the bishop of Jerusalem permission to demolish the temple to Aphrodite that stood over the cave so that the building of the Church of the Nativity could begin. 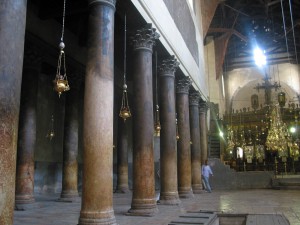 Interior of the Church of the Nativity, Bethlehem, July 2005.

Before Constantine’s building spree in what is today called the Holy Land, many devout early Christians made pilgrimages to Egypt. The city of Alexandria with its magnificent library was a favorite destination for the learned, Christian and non-Christian alike. And many of the fundamental spiritual beliefs of the ancient Egyptians were not lost on the leaders of the church.

Upon arriving at the east wing of the newly built Church of the Nativity, pilgrims saw an eight-sided enclosure topped with a cone-shaped roof that stood over an opening in the ground. Pilgrims used stairs to peer down from above to get a glimpse of the cave through the opening. The east wing also had a clay manger said to be the place where Mary lay Jesus after his birth. 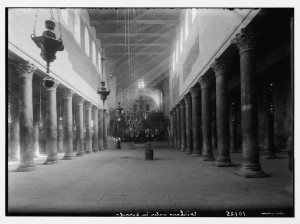 This photograph is from the G. Eric and Edith Matson Photograph Collection at the Library of Congress.

The west wing was a large square room with a center courtyard surrounded by a colonnade. Then to reach the basilica, pilgrims went upstairs using one of three sets of stairs. The basilica had a central nave with two double aisles on either side. Precious gold and silver adornments and embroidered hangings filled the church, according to Eusebius.

The Church of the Nativity stood until 529 when Samaritans revolted and burned down much of it. Justinian I (reigned 527 to 565) rebuilt and enlarged it. However, according to the “Historical and Archeological Analysis of the Church of the Nativity,” many scholars think the existing nave is the original one. Archeological excavations in the 1930s unearthed part of the original mosaic floor, which today’s pilgrims can see. Many of the other structures today’s pilgrims see date from the building that Justinian did, although remodeling and restoration projects have taken place since.